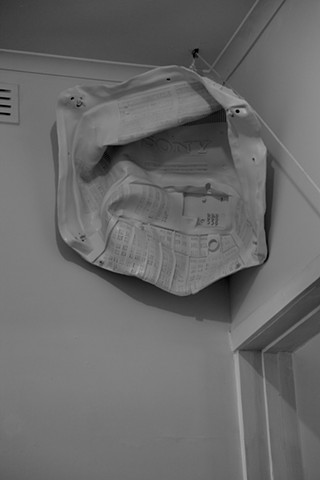 The title of the work is borrowed from the 1937 poem by Abel Meeropol in protest to the Marion lynching, and later became the lyrics for the song of the same name performed and popularized by Billie Holiday.

Historical research suggests that lynching – an extrajudicial execution carried out by a mob - becomes more frequent in times of social and economic tension, and has often been the means used by the politically dominant population to oppress social challengers.

I am interested in the social and economic control associated with technological advancement and ‘planned obsolescence’, in particular the recent shift from analogue to digital, which has enforced a whole-of-population disposal of televisions. Are we really active participants in a speed-space race, or are forced to run with the pack?

“Here is fruit for the crows to pluck, For the rain to gather, for the wind to suck, For the sun to rot, for the trees to drop, Here is a strange and bitter crop.” From the poem Strange Fruit, by Abel Meeropol (1937)